Master’s in Computer Science vs. Electrical and Computer Engineering

In 2018, IBM built a supercomputer the company called Summit, which became one of the most advanced computing devices in the world. Summit is the size of two tennis courts, and it runs about a million times faster than the average consumer-grade laptop. It’s also a perfect example of how the disciplines of electrical engineering and computer science intersect.

Supercomputers: It Takes a Village (of Engineers)

Looking at how even a few of the smaller components of a computer like Summit was built, it’s easy to see how a diverse range of disciplines interact within electrical engineering and computer science. Summit was designed to handle highly advanced and data-intensive machine learning processes. One of the challenges with machine learning in particular is that it often requires purpose-built hardware to be efficient. For example, one of the common hardware-centric questions for training machine learning algorithms is whether to use graphics processing units (GPUs) or central processing units (CPUs). The problem is that the best option depends on kind of technique being used and the goals behind the application.

Computer science covers the knowledge needed to write and train a complex algorithm, but it does not necessarily cover the expertise for building the hardware that can make it run efficiently. On the other hand, electrical and computer engineering builds an understanding of the structure, design and power requirements for running complex machines. Because the two fields are closely related, however, it is common for those with graduate degrees in electrical and computer engineering to perform work more closely associated with computer science and vice versa. For example, PayScale shows that software engineering is a common career path for graduates from either discipline.

Beyond the layout and design of individual components, computer and electrical engineers need to make considerations for the materials they’re made from, and the way these components communicate with each other. As the technology matures, these systems will become even more complex and likely include other types of processors. For example, some research has highlighted the potential application for digital signal processing to play a key role in lowering the heat density of supercomputers.

Computer science is commonly defined as the study of computational systems, and, as a discipline, it typically focuses on the software layer of technology. Electrical engineering is a broad field that includes computers as well as other electrical devices, systems that transmit and store electricity, and communications signals.

Related content: Careers with a Master’s in Electrical and Computer Engineering

Master’s in Computer Science vs. Electrical and Computer Engineering Degree 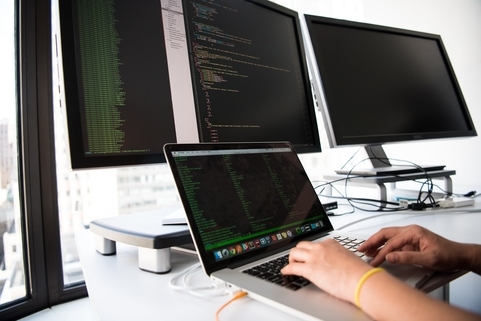 Electrical and computer engineering degree programs will have a mix of foundational coursework in key engineering concepts, such as applications of random processes, embedded computing systems, as well as classes in more specific areas such as nanotechnology.

For example, the University of UtahMS in Electrical and Computer Engineering degree offers courses that cover areas such as:

In many cases, the salary potential for similar positions across computer science, computer engineering, and electrical engineering graduates is similar. PayScale shows that software engineers with each type of degree earn an average salary of a little more than $90,000. However, the different fields do show slightly different common career pathways, which are summarized below, in order of their position on PayScale for the relevant degree.

With the majority of roles listed above, salary potential varies significantly by years of experience. For example, mid-career electrical engineers earn an average of 10% more than electrical engineers overall, and those in the later stages of their career earn over 40% more, on average.

As more compact and complex systems become more common across all areas of society — from autonomous vehicles to smart home technology to embedded computing devices for industrial systems — the need for engineers who have both the specialized skills relevant to their areas of interest and familiarity with multiple disciplines will grow. As Glassdoor noted in an article earlier this year, some of today’s top engineering jobs, like electrical engineer, have become long-standing roles within the field, while other roles have emerged due to evolution in technology.

The University of Utah online Master of Science in Electrical and Computer Engineering (MSECE) degree equips students with advanced skills in solving engineering problems, building effective systems, and leading multidisciplinary teams. Utah is a tier one research university, listed at No.11 for Best Value in the Wall Street Journal/Times Higher Education College Rankings and among the nation’s best engineering schools by U.S. News and World Report.

Our faculty offer individualized mentorship and draw insights from their own cutting-edge research to teach the latest methods and tools. You can complete your MSECE entirely online, fitting a world-class education into your schedule while discovering opportunities for innovation and entrepreneurship. The University of Utah Career and Development Center helps students achieve their long-term goals with a variety of resources and career coaches who are available for online appointments.

You can learn more about the University of Utah’s online Master of Science in Electrical and Computer Engineering program by filling out the fields below to download a free brochure. You can also call us toll-free at (888) 684-8510 to talk with one of our admissions counselors.

* All Fields are Required. Your Privacy is Protected.
Are you enrolling from outside the U.S.? Click Here.
Careers in Power Engineering → ← Careers with a Master’s in Electrical and Computer Engineering